McLaren 765LT Spider: The Pinnacle Of The Pure Combustion Supercar 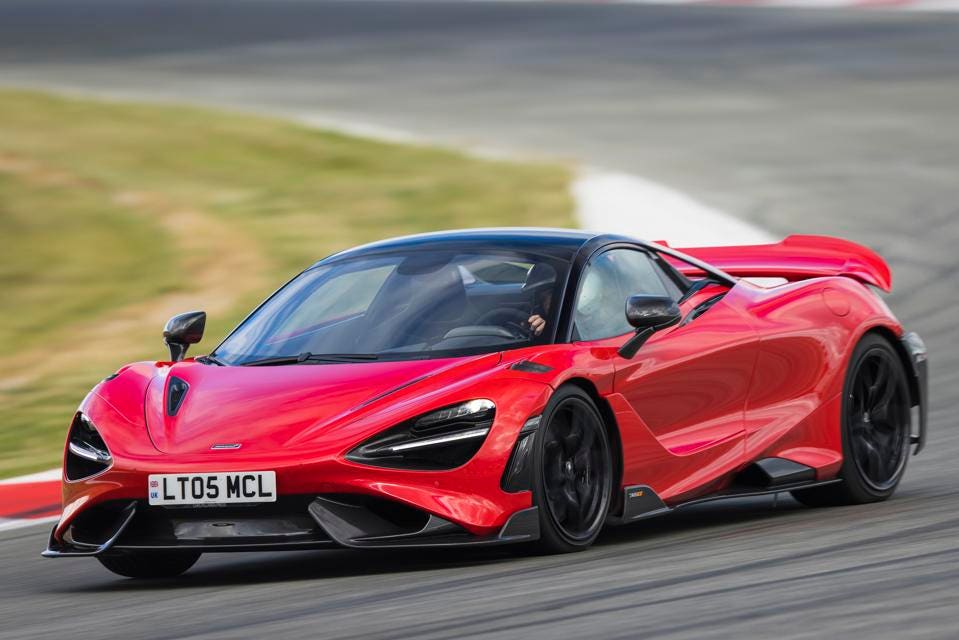 The 765LT Spider at home on the racing circuit.

History will honor the McLaren 765LT Spider as the high-water mark for the ultimate pure combustion driver-oriented supercar. It’s a bittersweet accomplishment as electrification alters the automotive landscape, yet this drop-top merits the spotlight for delivering innovative engineering, intoxicating performance, and incomparable driving dynamics in a visually stunning package.

The McLaren 765LT Spider is the British automaker’s follow-up act to the 765LT Coupe unveiled last year – the two are virtually identical mechanically. And both are focused on the same mission, which is to minimize weight to deliver extreme performance and new heights of driver engagement. Yet, unlike the fixed-roof Coupe, the Spider features an electrically operated one-piece carbon fiber Retractable Hard Top (RHT) that lowers or raises in just 11 seconds (at speeds up to 31 mph).

Whereas the Coupe places occupants inside a closed cockpit with limited outward vision (especially when configured with the optional snorkel-like air intake), the Spider dramatically opens the passenger compartment to the outside world. As a result, the cabin is brighter, and thanks to the Spider’s glass buttresses, the Coupe’s rear three-quarter blind spots are practically eliminated. In addition, the small back window is electronically retractable, allowing the occupants to control airflow within the cabin and the penetratihg audio level from the exhaust pipes. (The pioneering electrochromic roof, which alters its transparency electrically in mere seconds, is a must-have option.)

It’s no secret that McLaren has based the 765LT on the brilliant 720S, yet every single component has been painstakingly studied and revised to diminish mass and increase performance.

Mirroring the 720S Spider, the 765LT Spider utilizes the automaker’s MonoCage II-S carbon-fiber tub. Mid-mounted in the chassis is a 4.0-liter, twin-turbocharged eight-cylinder engine with a radical quad-tipped lightweight titanium exhaust. While the V8 is also fitted to the 720S models, it has been recalibrated for the 765LT to deliver an impressive 755 hp and 590 lb-ft of torque. The transmission (also common to the 720S) is an automated 7-speed dual-clutch gearbox, yet it has been strengthened and updated with new gearing to deliver 15 percent better acceleration.

Advanced underpinnings include the linked-hydraulic Proactive Control II suspension that uses hydraulics in place of clumsy sway bars to regulate body roll – again updated with revised algorithms shared with the McLaren Senna and Speedtail models. In addition, the ride height is lower and the track wider to improve handling. Bespoke ultra-lightweight forged alloy wheels (with titanium wheel bolts) are set at each corner – wrapped in sticky Pirelli P-Zero Trofeo R tires. Even the standard carbon-ceramic brakes are upgraded.

McLaren’s fixation with reducing mass is seen throughout the 765LT Spider. In addition to the weight lost from the titanium exhaust and forged alloy wheels, the vehicle’s glass is thinner, and a lithium-ion battery has been fitted. Even the suspension springs are crafted from lightweight alloys. And there is no carpeting. The automaker has even eliminated the air conditioning and audio system (both are no-cost add-ons). The fixation has paid off, as the 765LT Spider tips the scales 176 pounds lighter than the 720S Spider. In addition, McLaren offers its Super-lightweight carbon fiber race seats for those even more obsessed – the vehicle’s dry weight drops to a nearly unfathomable 2,818 pounds.

A handful of automakers offer supercars equally performance-focused. Still, it’s a challenge to find others as adept at tuning the machinery to near-perfection – from a driver’s standpoint, the 765LT Spider is almost faultless.

McLaren says the Spider will accelerate from a standstill to 60 mph in just 2.7 seconds (keep your foot down, and it will hit 124 mph after 7.2 seconds have elapsed). The performance figures put the vehicle in an elite category. Yet, on public roads, those numbers are challenging to achieve as the V8’s power is volatile – during the first few minutes of driving, the engine’s output has to be managed with kid gloves, or the rear wheels spin on the pavement.

Yet once the fluids are warm and the tires up to temperature (that pertinent information is displayed on the instrument cluster), the Spider is nothing short of stunning. Mash the accelerator pedal, and the engine responds immediately. Turbo lag is non-existent – just head-snapping acceleration as the rear tires claw for grip. The 2022 McLaren 765LT Spider is one of the only road-legal vehicles that cannot accept 100 percent throttle for more than two seconds as velocities blur into illegal territory.

Turn-in is immediate, with scalpel-like accuracy, with one of the most communicative steering systems ever put on a mechanized vehicle. There is zero body roll and no understeer – only an instantaneous change of direction as the front tires mimic following a rail embedded in the asphalt. The vehicle’s low mass translates to immediacy as every control input, whether accelerating, steering, or braking, occurs within a microsecond of the request (the driver is given the impression that the 765LT can slalom at speed between the tightly spaced reflectors on the highway). No other roadgoing vehicle responds or handles this dutifully – it borders on telekinetic.

While the 765LT Coupe is equally almighty in terms of sheer driving dynamics, the 765LT Spider advances the supercar experience by retracting its roof and exposing its passengers to the sounds of the turbochargers whooshing, the smell of the blooming flowers on the side of the road, and the visceral engagement as the wind rushes through their hair – the Spider is, as the British say, the “Full Monty.”

As expected, obtaining the highly desirable McLaren 765LT Spider isn’t easy. The first year’s production has already been spoken for, and the balance of just 765 worldwide units will likely be scarce (coming up with the $382,000 base price is arguably the easiest part of the acquisition). But it’s worth it. And now is the time, as this pinnacle of combustion-powered supercars will be a $1 million collectible within the next decade.